Female Driving Instructor Gloucester | Pass your Driving Test with Us

Having had lessons with an instructor in South Gloucestershire, who said Josh was ready to take his test, we found that the earliest test date around Bristol was into the new year. However, Quedgeley had an availability Christmas Eve.Eager to drive ASAP the Quedgeley date was booked.

Not knowing the test routes practising was difficult so one Sunday I spotted Carols School of Motoring at the Test Centre and asked for her help. Carol organised a driving course tailored to Josh’s specific requirements and after 2 intensive 2 hour lessons and clear direction for our separate practice sessions Josh took his test on Christmas Eve and passed with only 2 minor faults.

We are extremely grateful to Carol who was prepared to not only take on a pupil at face value but adapt to his situation and provide tuition at the level and input needed.I do not believe that many instructors would have picked up the challenge in the way Carol did and Josh’s passing of his test is much to do with Carols clear instruction and valuable input.

Carol was also prepared to furnish me with information and answer questions relevant to the test outside of the lessons which made the practice sessions easier and relevant. Josh has now the freedom he wanted, being able to drive his car and go places without hassle.

He is very grateful to Carol and recognises the important part she played in his test process.We both highly recommend Carol as an Instructor and thank her for being prepared to take on a pupil outside the normal process. 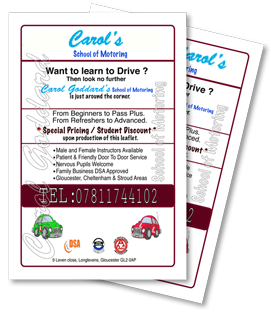